Our Research
Your Education Center 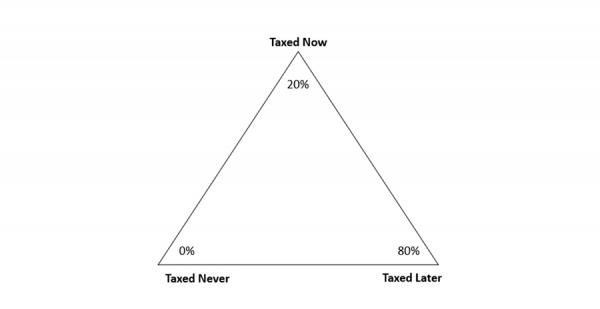 If we’re being honest with each other, there is nothing dryer than reading about taxes. Now that we are on the same page, if I told you a triangle could potentially save you tens of thousands of dollars, could I get you to continue reading? I’m going on the assumption you said “yes” and you’re still reading this. I’ll explain how tax diversification can save you thousands of dollars and how it will allow you to control your own tax bracket in retirement. I’ll show you both of these concepts using a shape we learned about in elementary school.

There are three ways to be taxed; now, later and never. For the remainder of this article, taxed now, later, and never are in reference to the taxability upon distribution from your accounts.

Your Traditional 401k, Traditional IRA, and SEP IRA are some of the account types that fall into this bucket. Most people will use these accounts for two reasons as a means to save for retirement. First, to lower their income tax in the current year. Second, they believe they will be in a lower tax bracket upon distributions than they are today.

Your Roth 401k, Roth IRA, and life insurance are a few examples of taxed never accounts. Again, people will use these accounts for two reasons as a means to save for retirement. First, they believe their tax rate will be higher in the future than it is today. Second, they are willing to pay taxes on their money today for tax free income in the future.

After looking at the chart, is it unrealistic to think rates could move dramatically higher over the next 50 years? Being a betting man, my money is on higher in the future. The possibility and probability, I don’t know?! (I’d delete that sentence). Since we can’t know for sure which direction they will go, why not create a strategy where you control what you pay in taxes? That's where the tax diversification triangle comes into play.

Before going any further, I need to address the tax nerds reading this. First, I say tax nerds lovingly, as I happen to be one. Second, I take some liberties in oversimplifying complex tax concepts. All I ask is for you to take what I’m saying at face value. There, I said it, let's move on!

This first imagine depicts what I see most commonly from a tax diversification standpoint. Roughly 20% of someone’s money in taxed now accounts and 80% in taxed later accounts. Although it is becoming more common to see investors with taxed never money, the tax-free bucket has been left untouched for some. Not surprising since Roth IRAs were only established in 1997. 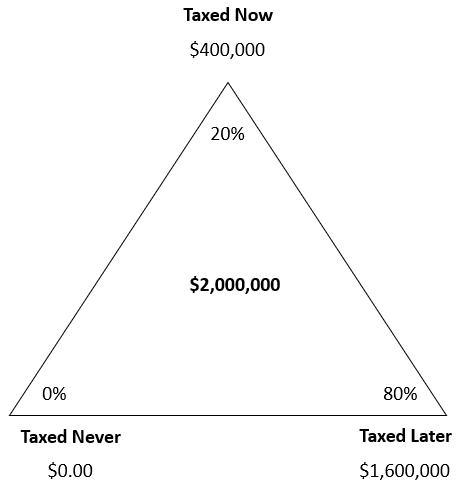 The top line of the image below shows money invested in each account before it is taxed. The second line of the image shows the net money received after taxes are paid. In this example, we assume a 25% tax for federal and 5% for state.

Account values before and after taxes using the alternative strategy

By reallocating the money your accounts are in, you save yourself around $240,000 in taxes. It’s an additional $240,000 without talking about investment performance or additional contributions. A simple concept of taking money from one pocket and moving it to the other.

Controlling Your Own Tax Bracket

My Assumption is Wrong

Let’s say that my assumptions are wrong, and taxes brackets are lower when you retire than they are today. You can still determine the most efficient way to take the money out. Maybe you are in a 14% tax bracket and long-term capital gains (LTCG) are still at 15% for you. Take the money from your taxed later bucket. Once depleted, you can move to your taxed now bucket and then to your taxed never bucket.

My Assumption is Right

I’m not predicting, but let’s say your tax bracket in retirement is now 35% federally and LTCG rates are still 15%. You have the ability to defer taking money from the taxed later bucket in favor of paying 15% on your taxed now bucket. Maybe you are looking to buy a second home or rental property in retirement. Instead of having 80% of your money in the taxed later bucket and having to pay an arm in leg in taxes to make the purchase, you have two buckets to choose from, taxed now and taxed never.

The average retiree is looking at a 25-35-year retirement. In the 25 years from 1969 to 1994, tax rates moved dramatically. This strategy allows you to take from the account that is most efficient based on the tax bracket you fall into. In year 5 of retirement, in may make sense to take from taxed later. If the tax code changes in year 6, no problem. Stop distributions from the taxed later bucket and start drawing from the taxed now or never accounts. Think of it as a three headed faucet. You have the ability to turn on and off the distributions based on whatever favors you the most in a given year.

These examples over simplify a complex tax code. There is a lot of planning that needs to go into determining what is the right financial move for you and your family. That said, by diversifying where you put your money, you may be able to keep more of it and pay far less in taxes. The strategy shown in example two also allowed you to control your own tax bracket. I favor flexibility. This triangle, in theory, gives you additional options and flexibility when it comes to your tax and financial planning. Hopefully, a dry topic can save you a good portion of your wealth!

This information has been obtained from sources deemed to be reliable but its accuracy and completeness cannot be guaranteed. Any opinions are those of the author and are not necessarily those of Raymond James. Neither Raymond James Financial Services nor any Raymond James Financial Advisor renders advice on tax, legal or mortgage issues, these matters should be discussed with the appropriate professional. Investing involves risk, Investors may incur a profit or loss regardless of the strategy or strategies employed. Retaining the services of a financial professional does not ensure a favorable outcome. Links are being provided for informational purposes only. Raymond James is not affiliated with and does not endorse, authorize or sponsor any of the listed websites or their respective sponsors. Raymond James is not responsible for the content of any website or the collection or use of information regarding any website's users and/or members.

Tweet
More in this category: « Rewirement Series Part III: How to Achieve Rewirement
back to top